We can assure that all our tickets are together

Towards the end of the 1960s, an ambitious group of businessmen decided to create a major club in the French capital. They chose to merge their virtual side, Paris FC, with Stade Saint-Germain after the team from Saint-Germain-en-Laye, located 15 kilometres west of Paris, won promotion to Ligue 2. The merger was ratified by the French Football Federation (FFF) and the new outfit, Paris Saint-Germain Football Club, came into being in 1970.PSG made an immediate impact both on and off the pitch, building a substantial fanbase and winning promotion in their first season. Their momentum was soon checked, however, and the club split in 1972; Paris FC remained in the top-flight while PSG was demoted to Division 3. Two seasons later, however, PSG returned to Ligue 1, moving into the Parc des Princes in 1974.

The club's trophy cabinet welcomed its first major silverware in the shape of the Coupe de France in 1981–82 as PSG defeated Saint-Étienne on penalties in the final. Four years later, coach Gérard Houllier led the team to their maiden league success, with Safet Sušić pulling the strings in midfield. An even brighter era then dawned when broadcasters Canal+ took over in 1991 and hired Luis Fernández, an emblematic player of the club in the 1980s, as coach. Although just one more Ligue 1 crown was added in the following decade, PSG's crowning glory came with triumph in the 1996 UEFA Cup Winners' Cup Final, Bruno N'Gotty hitting the only goal as Rapid Wien were defeated 1–0. One year later, Les Rouge-et-Bleu finished runners-up to Barcelona in the same competition.

Reinforced by new star Zlatan Ibrahimović, Paris warmed up for the 2012–13 season with the aim of winning the league crown that dramatically eluded Carlo Ancelotti's men the previous year. Zlatan’s 30-goal haul almost single-handedly led the capital side. In the end, a 0–1 win away to Lyon secured the club’s first Ligue 1 title in 19 years, and third overall. Jérémy Ménez struck the goal that sent Paris into rapture. PSG finished 12 points clear of second-placed rivals Marseille. For the first time in the club’s history, Les Parisiens defended their title and also secured a maiden league and domestic cup double thanks to Edinson Cavani's brace in the 2014 Coupe de la Ligue Final win over Lyon. PSG set a new all-time best points total of 89 for Le Championnat and also bettered the benchmark of 26 victories with a total of 27. Now led by Laurent Blanc, who succeeded Ancelotti, PSG also won the Trophée des Champions against Bordeaux (2–1) in the 2013–14 season curtain-raiser. 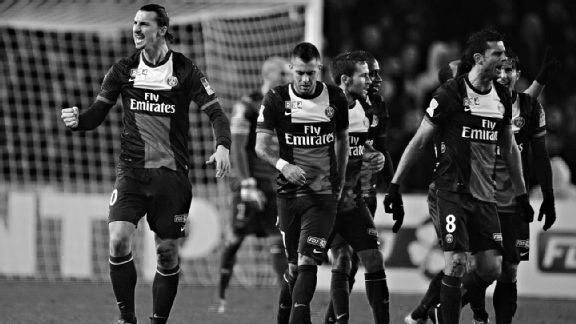 We use cookies to ensure that we give you the best experience on our website. If you continue without changing your settings, we'll assume that you are happy to receive all cookies from this website. If you would like to change your preferences you may do so by following the instructions here OK